Gyroskop and Accelerometer in a single Chip 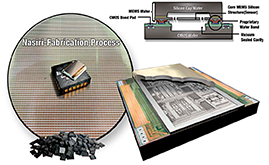 Miniaturizing unwieldy sensors such as gyroscopes and accelerometers through micro system technology created a completely new class of applications, from dead reckoning in GPS-free locations to image stabilizers in cameras and camcorders.

Game consoles also benefit from the new component, since the players can now use their whole body movement and thus get involved even more intensely into the virtual action. Equipped with 6-degree-of-freedom (DOF) inertial motion units the size of a watch, input devices of the future will react to any movements and implement these in 3D computer worlds. 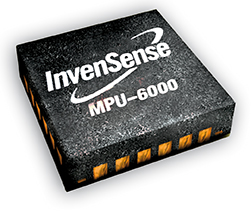 With its integration of a 3-axis gyroscope and a 3-axis accelerometer together with a Digital Motion Processor™(DMP) able to carry out complex 9-axis sensor fusion calculations on the same chip, this component range represents a breakthrough in MEMS sensor technology. The increasing popularity of motion detection in everyday consumer devices, which was first implemented in Nintendo®’s Wii™ console and later in Apple®’s iPhone™, meant that motion processing has now spread to smart phones, tablet PCs, TV remotes, game consoles, digital cameras and many other products.

The anticipation of motion processing in these mobile devices promises a whole bundle of new applications and functionalities for the customer:

Precise detection and compensation of inevitable handshake in order to im­prove image & video stability, dead recko­ning for GPS in vehicles and for pedestrians inside buil­dings 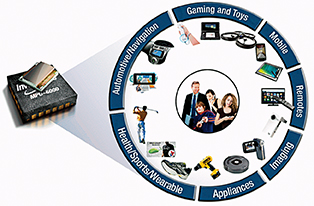 Due to the absence of standardized solutions allowing quick and easy im­plementation with OEMs, such devices have been difficult to rea­lize, since they required the development of an inte­grated motion detection solu­tion with numerous components from different manufacturers, signal conditioning, proprietary sensor fusion algorithms, processing power and other resources, and last but not least, a profound understanding of the complex IP challenges in this domain, all of which meant costs and delays on the way to the finished product.

Although integrated 3-axis accelerometers have been used in consumer electronics devices and have been available from several manufacturers for approx. 10 years, high-quality gyroscopes at consumer prices still present 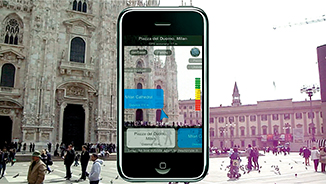 a number of technical challenges which stood in the way of widespread use. By launching the world’s first integrated 3-axis gyroscope in 2009, Invensense be­came a pioneer and market leader for MEMS gyros­copes for consumer de­vices.

The perfect aligning of all axes of the gyroscope and of the accelero­meter repre­sent a decisive advantage of the integrated 6-axis solution, as it renders costly calibrations un­necessary which are required for discrete solutions. Additionally, there is no need for an external accelerometer, and the new Invensense MPUs are available in the same package and pinning as the currently available 3-axis gyroscopes - hardware enhancements are therefore relatively painless. The master I2C bus, which takes over 3-axis compass values from an external sensor, allows the realization of a complete 9-axis sensor fusion system using InvenSense’s proprie­tary DMP & MPL functions.

The Nasiri manu­facturing process forms the key technology for motion processing since it enables integrating micromechanical MEMS structures and CMOS electronics on wafer level, thus eliminating the scaling problems in manufacturing which are generally associated with MEMS. The MEMS product range is based on proven 8” wafer production lines from renowned global manufacturers and on proprietary testing & calibration facilities for batch production in Taiwan in order to satisfy the high demand of consumer markets. The MPU-60x0 components also comprise a proprietary 9-axis sensor fusion DMP engine and are cur­rently the only fully inte­grated solution on the market.

This allows using a single motion processing solution and any conceivable motion application, from slow menu selections to recognizing fast gestures, all in 16 bit reso­lution. With its 0.005 deg/s/Hz, the component sets a new industry stan­dard for noise characteristics and thus offers the highest quality and user-friendli­ness for image stabilization or pointing and game applications.

Precise calibration by the manu-facturer with a ±1% tolerance for the initial sensitivity reduces the necessity for subsequent fine tuning. 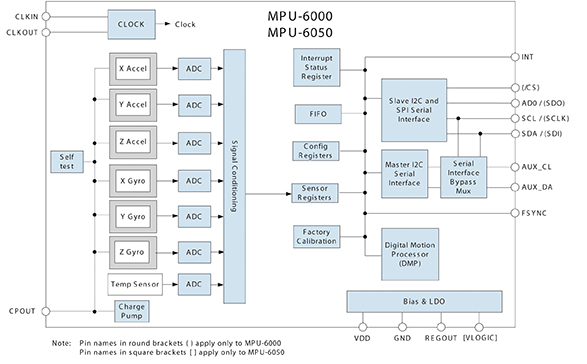 The gyroscope runs at a resonance frequency in excess of 27 kHz and the MPU-60x0 is thus fairly immune against interferences from audible frequencies (20 .. 20,000 Hz) such as music, ringing phones or noise which is very important for noise sensitive applications such as image stabilizers.

Further industry-leading characteristics are the 4 x 4 x 0.9 mm 24-pin QFN plastic package, on-chip 16-bit ADCs, programmable digital filters, a precision clock with 2% tolerance at -40° C to 85° C, an embedded temperature sensor, programmable interrupts and a power consumption of only 5.5 mA. These components are available with I2C or SPI interfaces, an operating voltage of between 2.5 and 3.6 V and a VLOGIC interface voltage of 1.71 to 3.6 V.

With the integration of the Digital Motion Processing Engine (DMP) into the MPU-6000 ICs, Invensense has transferred a significant amount of processing power to the IC which would otherwise have to be supplied by a host CPU. Particularly in view of applications such as TV remotes, this turned out to be the winning strategy, as their CPUs are generally rather underpowered.

In return, it now becomes more elaborate to initialize and set the para­meters for the component and to retrieve

measured va­lues, since a simple registry model is no longer suf­ficient for these complex func­tions.

Invensense has therefore developed the Motion Processing Library (MPL) API which is available as source code. The MPL is a software layer which immensely simplifies the integration and linking of an application processor.

It also enables direct access to motion data in the form of quaternions, rotation matrices (Euler angle) and to measures such as linear acceleration and gravity, thus rendering complex calculations unnecessary.

In combination with the MPL, the DMP reduces the utilization load of the appli­cation pro­cessor by up to ten times and removes any real time requirements for retrieving and processing data, enabling the implementation of 9-axis motion processing on smartphone platforms with sub-1Ghz processors. The motion processing library is also available for several popular mobile operating systems such as Android, including the current Gingerbread version, but also for older versions such as Éclair (2.1) and Froyo (2.2).