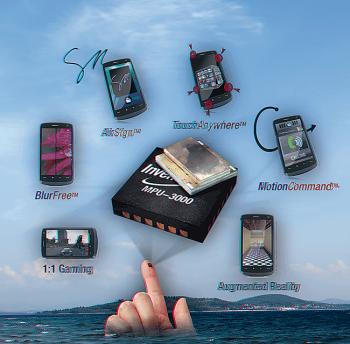 The integration of gyroscopes and acceleration sensors has now reached a stage where motion can be processed in a simple and cost-efficient manner in consumer devices. Always looking for promising product advantages, manufacturers are implementing acceleration sensors into mobile phones, digital cameras, TV remote controls or to medical equipment, in order to stand out from the competition. This was made possible through the progress in the field of MEMS technology, which allows the cost-efficient manufacture of large numbers of inertial sensors such as gyroscopes, accelerometers and compass sensors.

Analyzing the physical parameter “motion” is becoming an increasingly mandatory feature for modern game consoles, as can be seen with the Nintendo Wii or the Sony PS3, but equally in smart phones and mobile phones, where motion sensors determine image orientation or generally serve as input interface.

Such features are finding their way in a large variety of different electronic devices, such as in portable medical applications for patient and rehabilitation monitoring. Digital cameras are fitted with position and heading sensors, in order to ex­pand the visual information with location data and to document the exact direction of the camera at the time when a picture is taken.

Next generation TV remote controls feature fast two-way communication with media centres and are equipped with sensors for precise position detection in order to enable ergonomic on-screen menu navi­gation. As know-how progresses, motion pro­cessing components are becoming smaller and more cost-efficient, and the scope of applications is, in principle, unlimited.

Below is an overview of measuring techniques used in motion sensors available today which are offered at consumer prices. 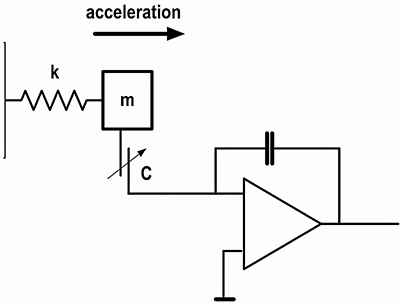 Figure shows the principle of an accelero­meter - a suspended testing mass reacts to acceleration by moving in the preferential direction. This modifies the value of the variable capacity “C” and leads to a corresponding change of the initial through suitable processing of the measured values.

Solutions currently available on the market typically integrate sensors for the 3 spatial directions X, Y and Z and also comprise the required ADCs in order to digitize the measured values with a resolution of 6-bit to 14-bit. Sensors for consumer devices generally have a measuring range from ±1g to ±8g and a power consumption of between a few 10 μA in low-power wake-up mode (at ~10Hz scan rate) up to 400 μA in full-power-mode at a rate of ~200 Hz.

The low power consumption and the fairly low costs are, of course, good news for developers of hand-held devices, so that accelerometers are frequently used as “wake up” devices, e.g. for powering up a MID as soon as it is picked up. These sensors also frequently serve to detect image orientation (por­trait or landscape format) or as pedometer in sport applications.

Since an accelerometer cannot differentiate between gravity-induced acceleration and move­ment-induced acceleration, the output value must be interpreted or filtered if it is to be used as tilt sensor. However, this procedure is not suitable for all types of movement, accelerometers are therefore fre­quently supplemented with gyroscopes in order to achieve reliable motion detection. For instance, Nintendo has expanded his Wii Remote, which is fitted with accelerometers, with a “Motion Plus” dongle in order to create the basis for new gaming applications. 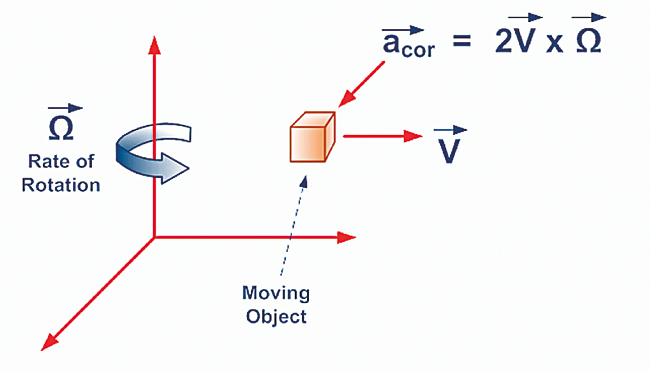 Gyroscopes or angular rate sensors are used to capture angular velocities. Figure shows the physical principle at its base, the so-called Coriolis Effect, which says that a mass rotating with Ω is exposed to an acceleration acor if it is moved in a linear manner at the speed of  V. The Coriolis acceleration is used in turn to mechanically change the capacity of a capacitor structure and to convert this change into a voltage change which can finally be measured as equivalent to the angular rate.

The Invensense ITG-3200™, a 3-axis gyroscope, represents the current state of technology for gyroscopes used in electronic consumer devices. It is the world’s first chip-integrated angular rate sensor supporting the three axes X, Y and Z.  Up to the current day it has been impossible to exploit the large market for 3D-remote controls with motion-controlled menu-navigation, due to the lack of suitable sensors and the resulting overall costs. 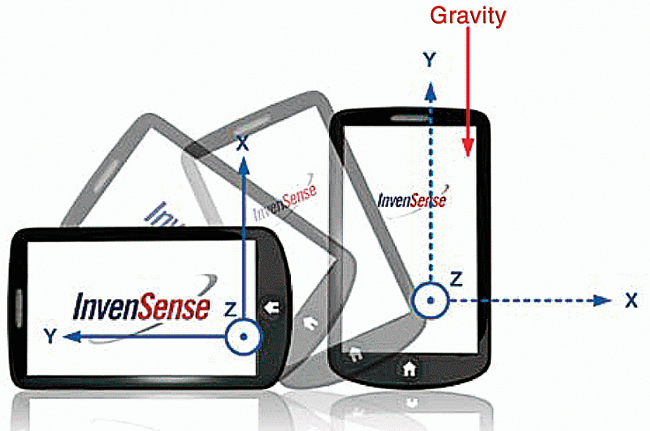 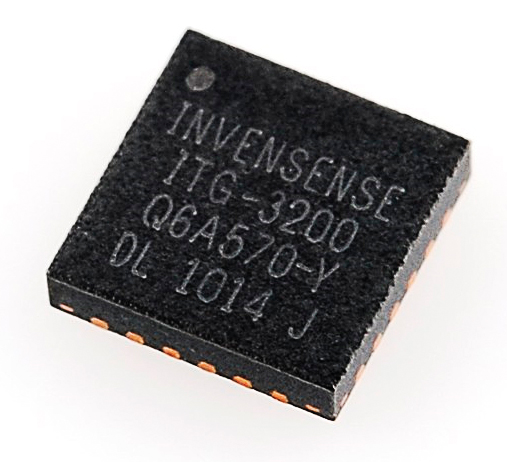 With its innovative system integration and the design of its digital output interface, the ITG-3200 responds to this demand, achieving a power consumption reduction of 60 % compared with analogous solutions by  competitors, and a package size reduced by half. Unlike accelerometers, gyroscopes do not react to gravity but exclusively to rotational movements. Combined with acceleration sensors, they therefore provide an ideal solution for separating movement vectors into their gravity, linear and rotational components. 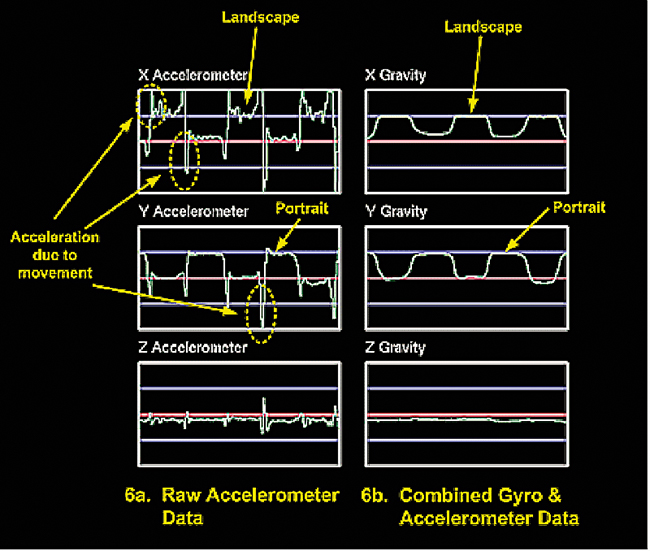 Figure shows the rotation of a portable device from landscape to portrait orientation and back. The 3-axis accelerometer (left column) initially records a constant value for the x-axis, then (after the first rotation) a constant value for the y-axis and so on. However, each transition produces undesired effects caused by the acceleration. Although these can be eliminated with a low-pass filter, this would affect speed and sensitivity of the sensor.

It would be preferable to add a gyroscope and to link both output vectors (each for x, y and z) with a mathematical process called sensor fusion. The right margin shows the result of this operation, there is now a clear and interference-free signal of the orientation change.

The output of a gyroscope is the angular rate, i.e. a simple integration over time is required in order to determine the relative angle change. However, with this operation also a possible bias error (deviation from the zero value when the turn rate is 0) turns form a constant to a linear value, i.e. it increases with integration time. Therefore, methods are required to compensate these errors caused by noise, temperature drifts and time.

In this area as well, gyroscopes can be supple­mented again with other sensors. Alternatively, a gyroscope can be easily zeroed if it is known to be stationary. In order to achieve this, all output signals are measured for a few seconds and their changes are recorded. If no changes are detected, one can be fairly sure that the gyroscope is stationary, and current output values can be set as the new bias.

Acceleration sensors and compass sensors are, of course, also subject to bias drift, but since the output values of both types do not require inte­gration (the accelerometer indicates the gravity-induced tilt angle, compass sensors indicate direct angle outputs), there are no non-constant errors either.

However, if acceleration sensors are to be used for measuring distances, a two-fold integration is required, and in case of velocity measurements, one needs a simple integration. As a general rule, bias errors are only negligible if the output signal does not require integration.

Magnetic sensors, also called compass sensors, are used in order to detect the direction of movement relative to the magnetic north pole of the earth. Various technologies are employed, such as Hall, Anisotropic Magnetoresistive (AMR) and Giant Magnetoresistive (GMR).

These devices detect changes in certain physical properties due to the effect of magnetic fields and thus indirectly measure the magnetic field. The advantage of a compass sensor is its capacity to detect and to output the direction of movement relative to a reference - the magnetic north. The gyroscope does not dispose of this capacity, since it only indicates the relative value of a covered rotation. Furthermore, compass sensors are generally used in order to detect vertical and horizontal move­ments, while gyroscopes are able to output move­ment data for all 3 spatial axes. 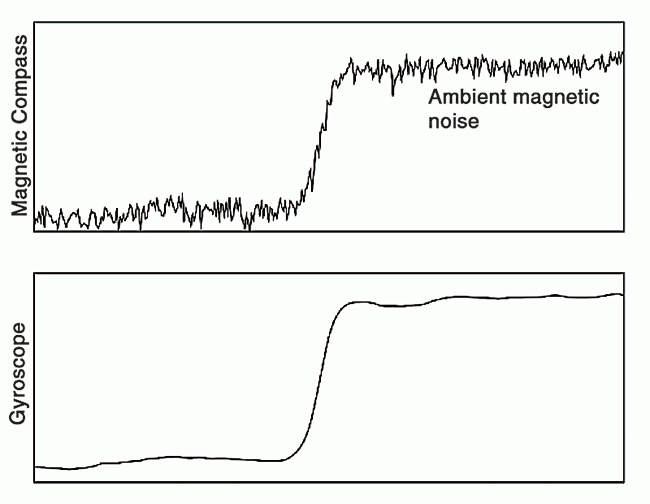 Unfortunately, magnetic sensors also react to other effects apart from the magnetic field of the earth (which is usually situated in the range of 30 µTesla up to and above 60 µTesla). In unfavourable conditions, this means that mobile phone signals may be captured or interferences from electric devices, and that magnetic fields from strong magnets in loudspeakers, for example, are also measured, which are probably present in all households.

However, this is not necessarily a problem, since such situations are usually stationary, i.e. loud­speakers are not changing their position while one listens to music. For consumer applications, though, reliable direction data is sufficient, even if it does not exactly correspond to the magnetic north.

Last but not least - image sensors 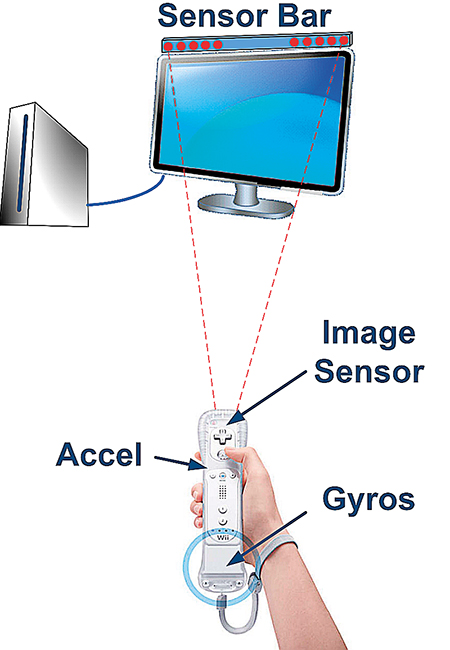 For completeness’ sake, one should mention the possibility that image and camera sensors can also detect movement, albeit indirectly. The Wii remote, for example, uses a camera built into the mobile device in conjunction with an IR-line, in order to detect the point on the screen which the user is aiming at. However, image sensors are generally not very suitable as movement detectors, as they are subject to numerous limitations. They require certain lighting conditions, for example, and only dispose of a limited capture angle and generally have a slow scan speed of only 15 to 60 frames per second.

However, the ultimate movement detection can be achieved by combining all types of sensors in order to balance the limitations of each individual type with different measuring methods. This may sound elaborate, but is easily achievable nowadays, since all 3 described types are available as integrated 3-axis solutions at low costs. 3 sensor modules, intelligently linked with a controller, are integrated in such a 9-axis system. In order to facilitate the design of motion processing systems, Inven­sense has created a reference board integrating the digital 3-axis gyroscope ITG-3200, but which also comprises a 3-axis acceleration sensor and a 3-axis compass.  The entire module thus forms the 9-axis reference design and is completed with Windows demo software which enables extensive testing of all functions. 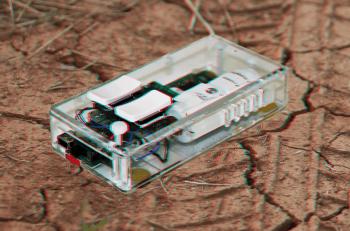 An Atmel AVR XMEGA 8-bit controller was used which links the data of each of the 3-axis sensors for acceleration, angular rate and compass, a process called sensor fusion at Invensense. Firmware fits into a 32kByte FLASH and supports “Air Mouse”, free-movement pointing devices, as well as recording movement data (data logging) and a multi-function PC demo in order to present the functions of all sensor types. The kit shows the ITG-3200 with his high resolution 16-Bit ADCs, enabling high dynamics for the precise capture of slow and fast movements.

The reference design is powered by a rechargeable battery and features Invensense’s motion pro­cessing technology as well as Bluetooth/USB-interfaces, and represents a starting point for developers of all kinds of motioncontrolled applications. The reference kit consists of 3 assembled mini chips and is sufficiently small to enable partial integration into existing devices as well. 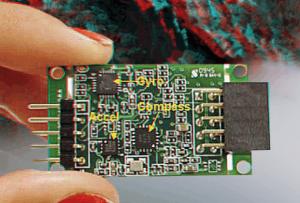 The system hardware of the demo comprises the 3-component sensor, USB/power and RF, each mounted on a separate miniature PCB which can be slotted together for a “full featured” device. Figure shows the connections and the most important signals of the entire system. The sensor­ board can also be ope­rated separa­te­ly, for tes­ting with an air mouse or a remote con­trol.

The USB/ power board offers support features for the sensor module including the Li-Ion charger, a USB interface for power supply and charging and for transmitting data to a PC. A CSR-based RF-board serves as Bluetooth module for wireless data transmission to the PC demo software. However, instead of HID (= human interface device) SPP (= serial port profile) is used as Bluetooth profile, since it is better suited for transmitting raw data and processed movement data. 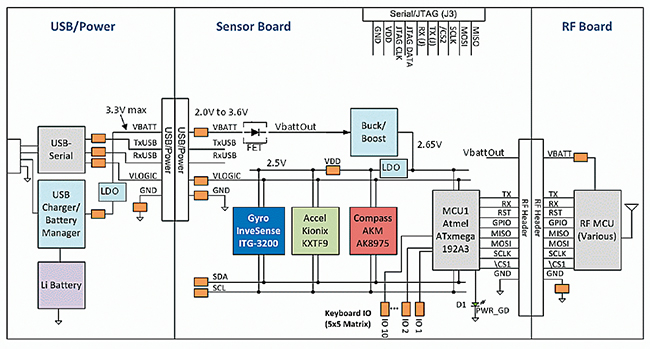 The 9-axis reference design has generally been conceived as open development platform, in order to enable developers to implement their own ideas with regard to the processing of sensor data in the MPU and for the implementation of PC software.