such as gyroscopes and accelerometers with microsystems technology created an entirely new category of applications, from dead-reckoning navigation in areas without GPS coverage to electronic image stabilizers for cameras and camcorders.

These new components are now also starting to impose themselves in the field of robust industrial applications, where they allow precise, cost-efficient and space-saving motion capture and analysis, e.g. in order to improve the aim of robotic arms or even to stabilize unmanned flying objects. 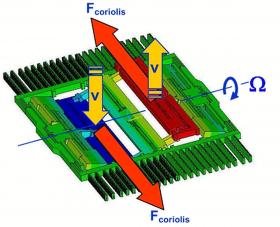 By introducing the MPU-3300, Invensense have recently made their technology available for industrial applications. The 3-axis MPU-3300 gyroscope integrates a comprehensive MEMS (Micro Electro Mechanical System) turn rate solution in a 4x4x0.9 mm housing: multiple lamellae, connected only by thin longitudinal ribs, are made to vibrate through electrostatic excitation of their mechanical resonance. When turned along its lateral axis, the structure is slightly displaced by the resulting Coriolis force, changing the capacity of the connected plate capacitor which can be subsequently measured and analysed.

Two of such structures, placed at 90° angles, capture rotational movements of the X/Y axes; for the Z-axis (vertical axis), a different MEMS structure is used where the lamellae vibrate in a different spatial direction. The MEMS sensor thus comprises the actual microstructure and the required excitation and measurement data capture components which are manufactured using the "classic" CMOS process.

Invensense's sensors are manufactured using a particular procedure named after Steven Nasiri, the founder of Invensense. The "Nasiri" manufacturing platform fixes the MEMS structure "head first" onto the CMOS by using eutectic metal sealant which serves at the same time as electric conductor and for hermetically sealing the resulting cavity. 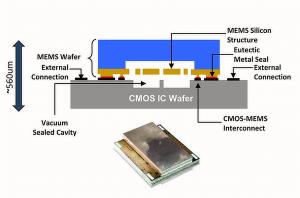 The MPU product range is based on proven 8" wafer manufacturing lines of renowned global manufacturers and on proprietary testing & calibration facilities for batch productions in Taiwan in order to fulfil demanding requirements with regard to order volumes and quality.

These properties offer additional flexibility for the development process and enhance the scope of applications for the component on Data Acquisition Terminals (DAT) and on other electrical devices for monitoring electrical parameters.

When the going gets tough... 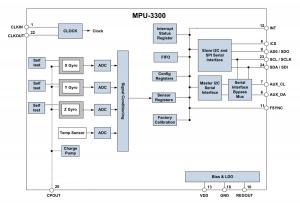 With 2 programmable measuring ranges, which can be set to 225 or 450 dps (degrees per second), very low drift, a temperature range from -40°C to +105°C and a shock resistance of 10,000 g, the MPU-3300 is particularly suited for rough industrial environments.

Accuracy across the entire temperature range is ±2%, and zero rate output accuracy at temperature is ±0.14 dps/°C (angular degree per second and degree Celsius). At only 0.005 dps/√Hz, the MPU-3300 offers industry-leading noise performance, which is significantly better than industrial gyroscopes from competitors which are rated from 0.01 to 0.03 dps/√Hz.

With a bias stability of 15 angular degrees/h for each of the 3 axes, the MPU-3300 is perfectly suited for a whole range of industrial applications such as Attitude Heading Reference Systems (AHRS, position & heading detection), which require extremely stable sensor performance for precise motion tracking. AHRS devices are used in aircraft, robots and other systems which require the measurement of spatial orientations. The high degree of stability also makes zero-point calibrations significantly easier.